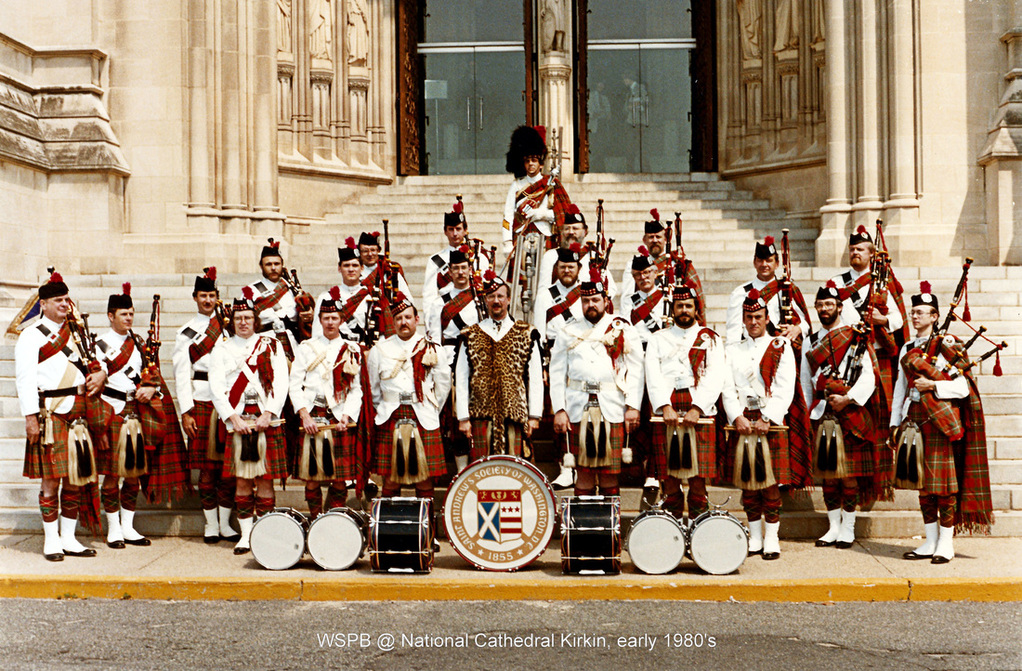 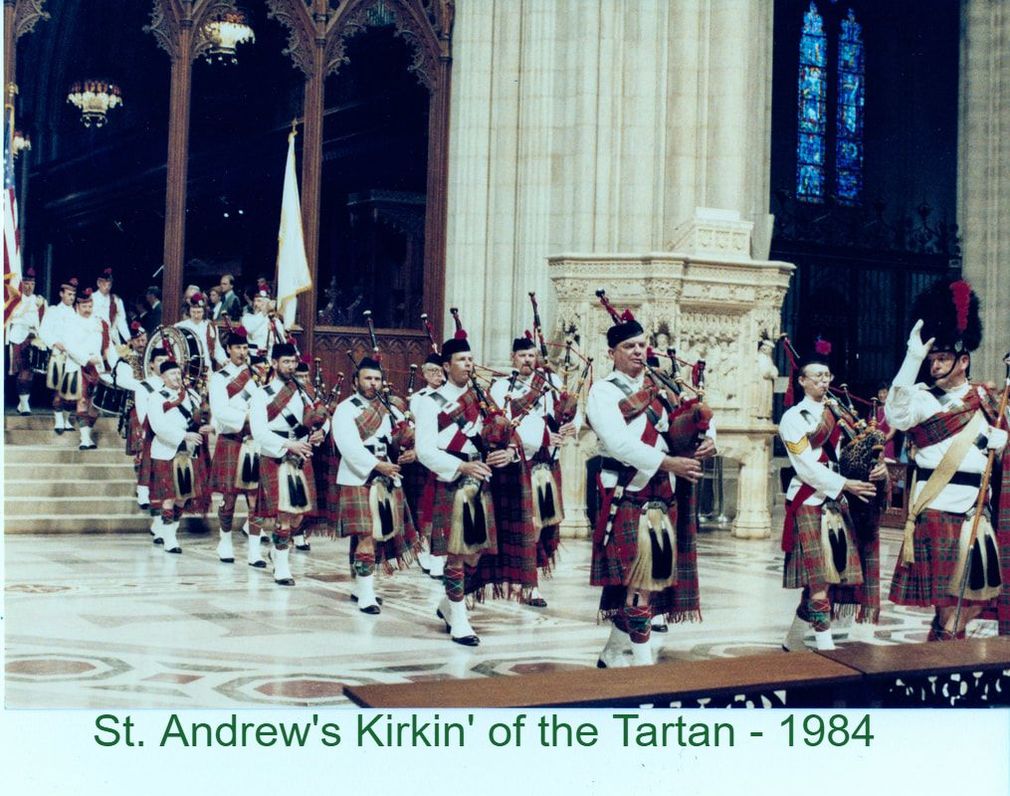 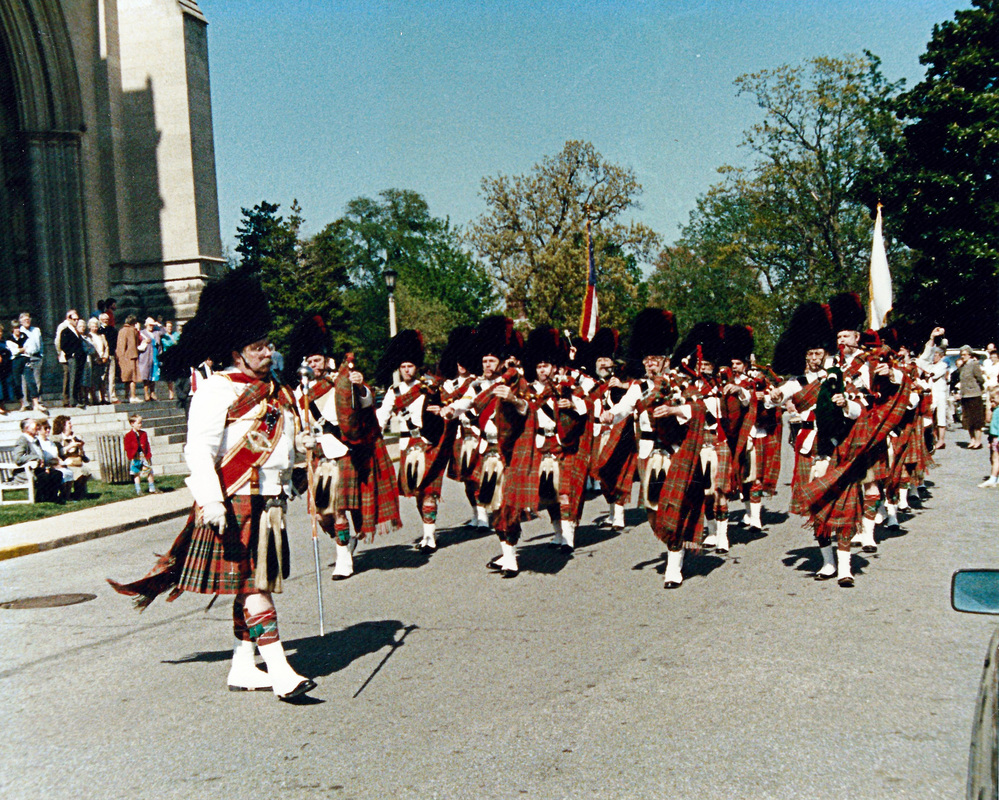 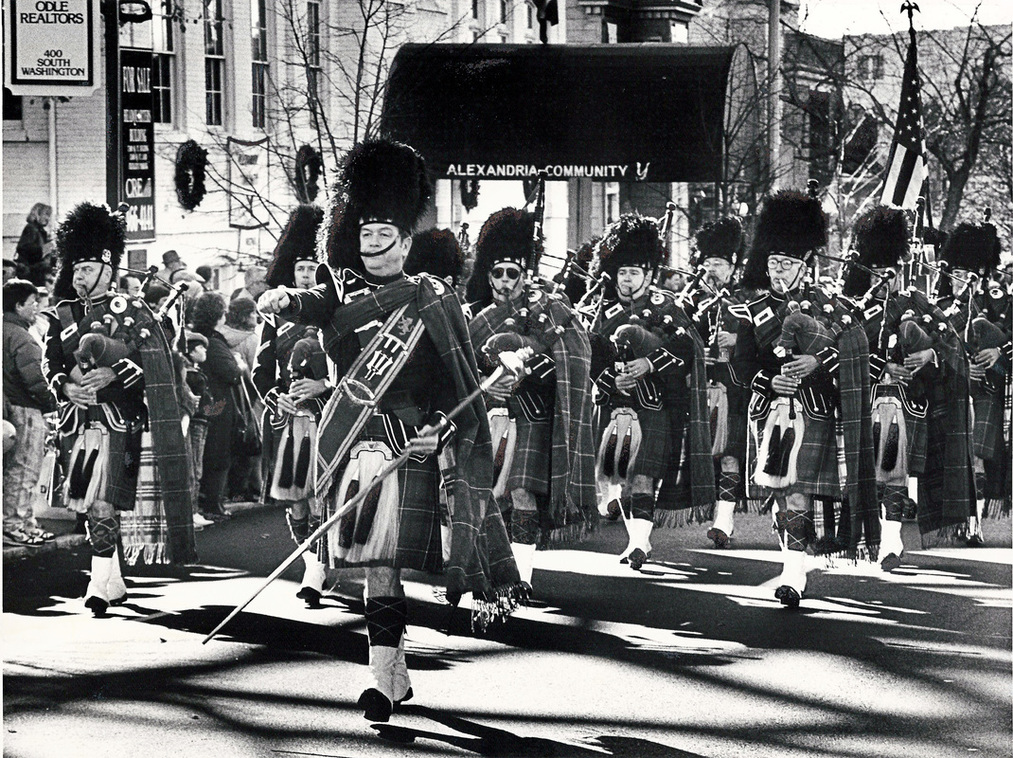 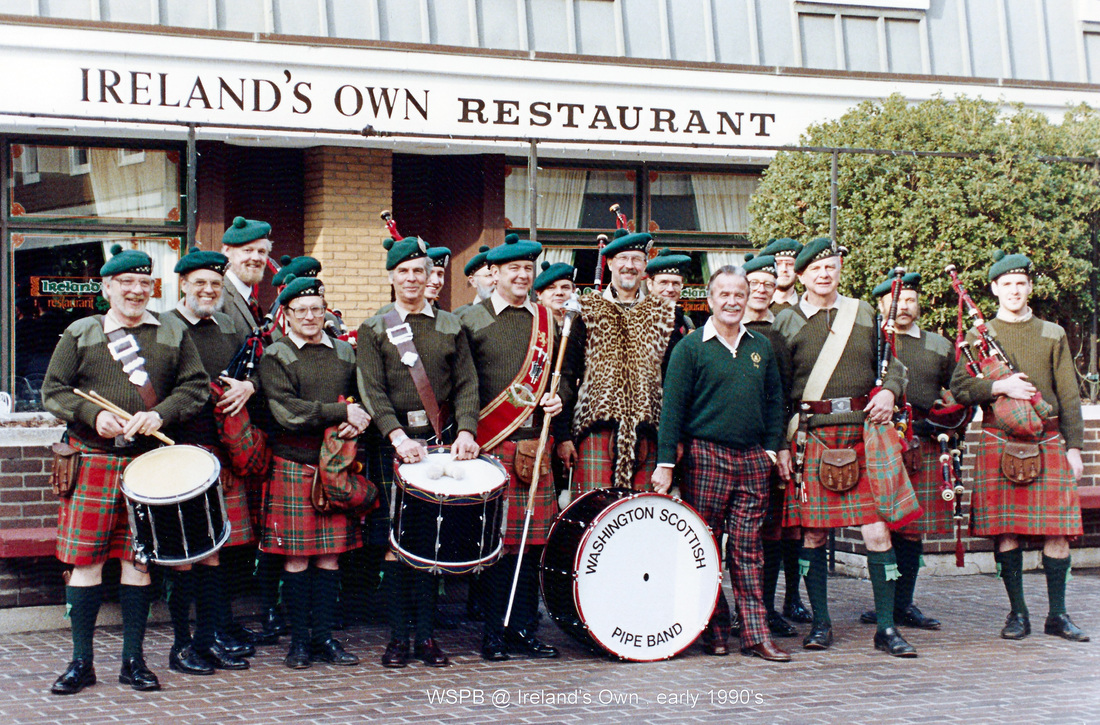 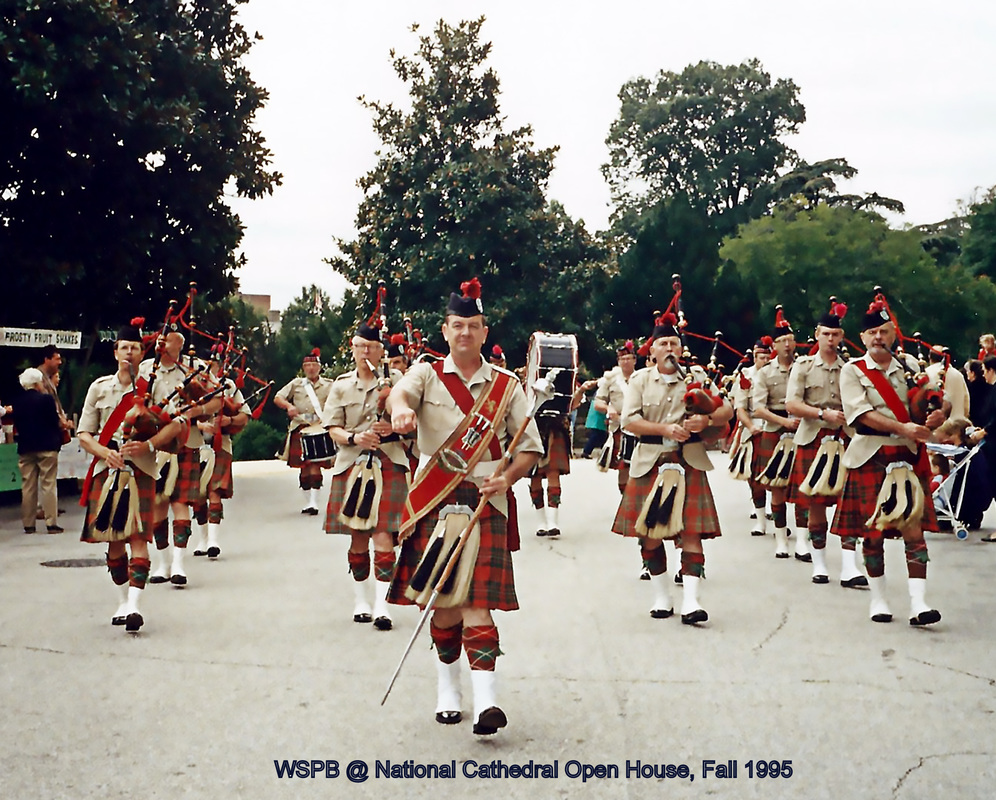 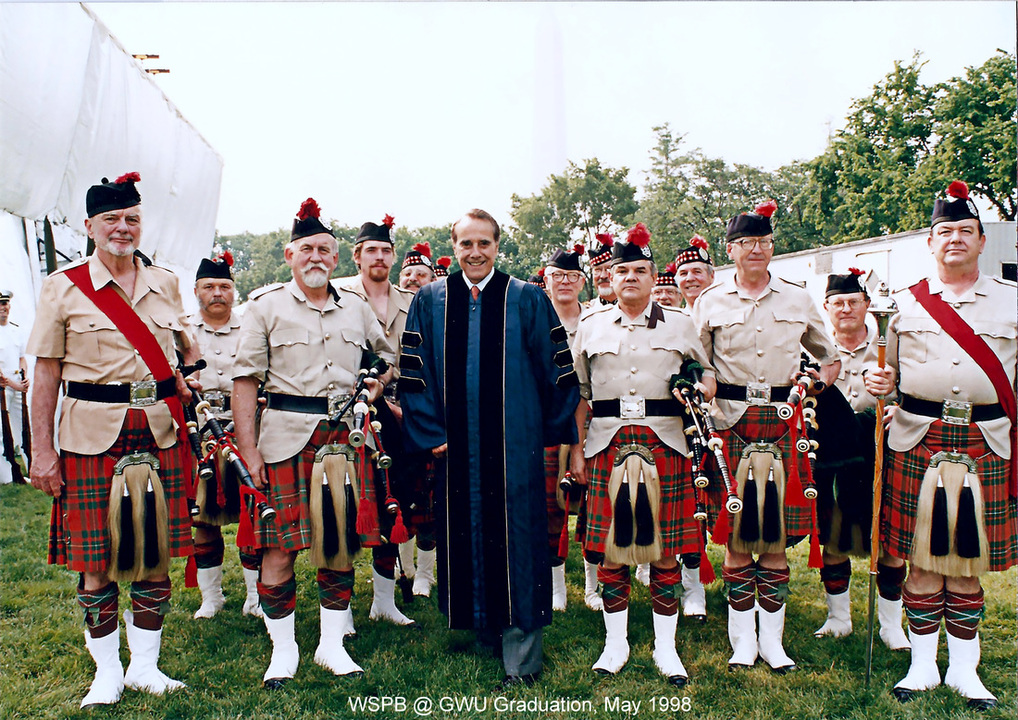 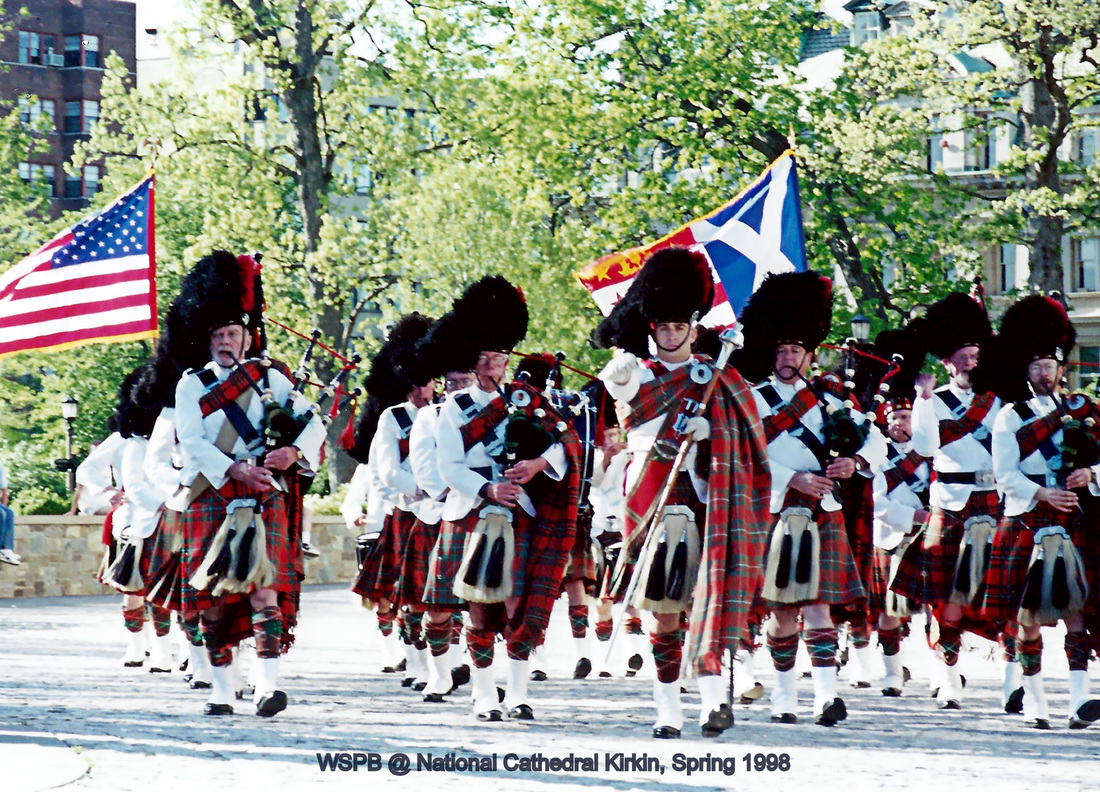 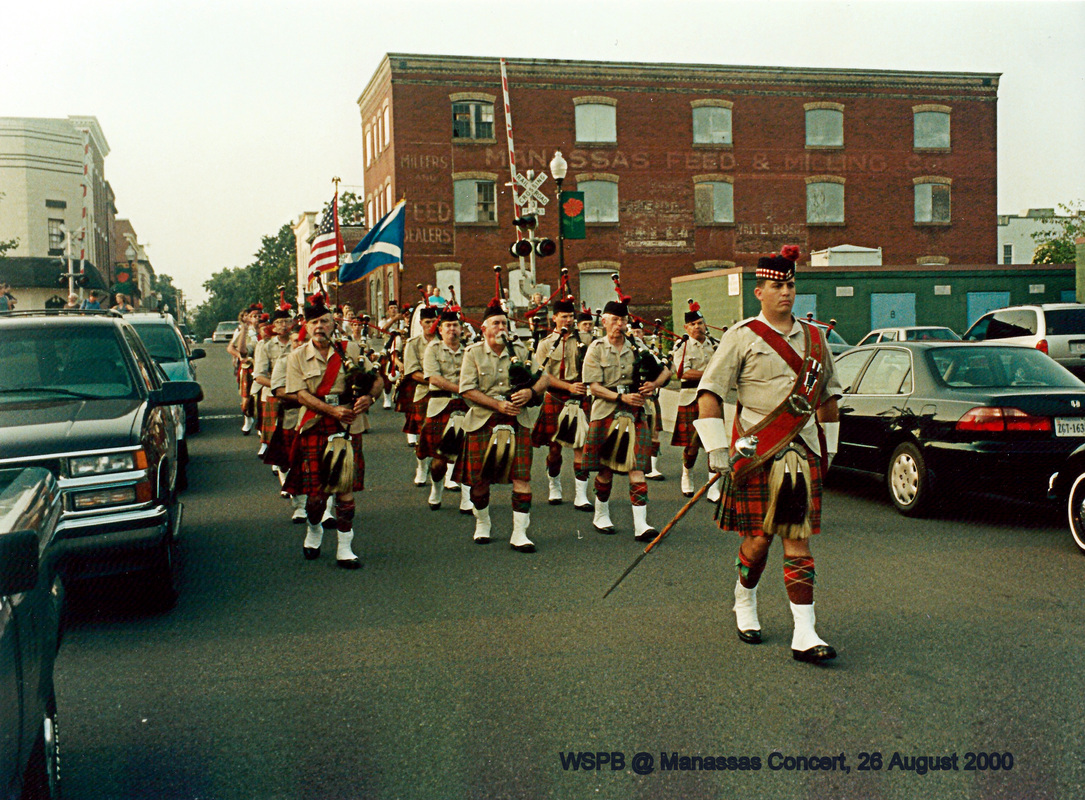 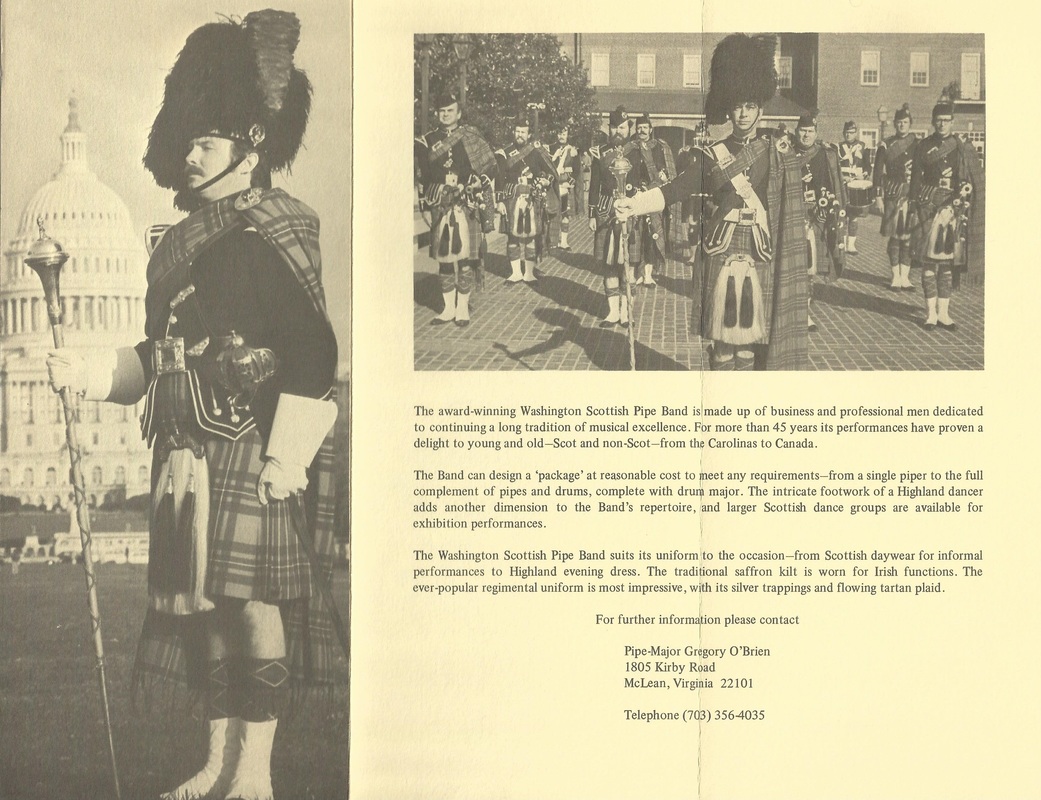 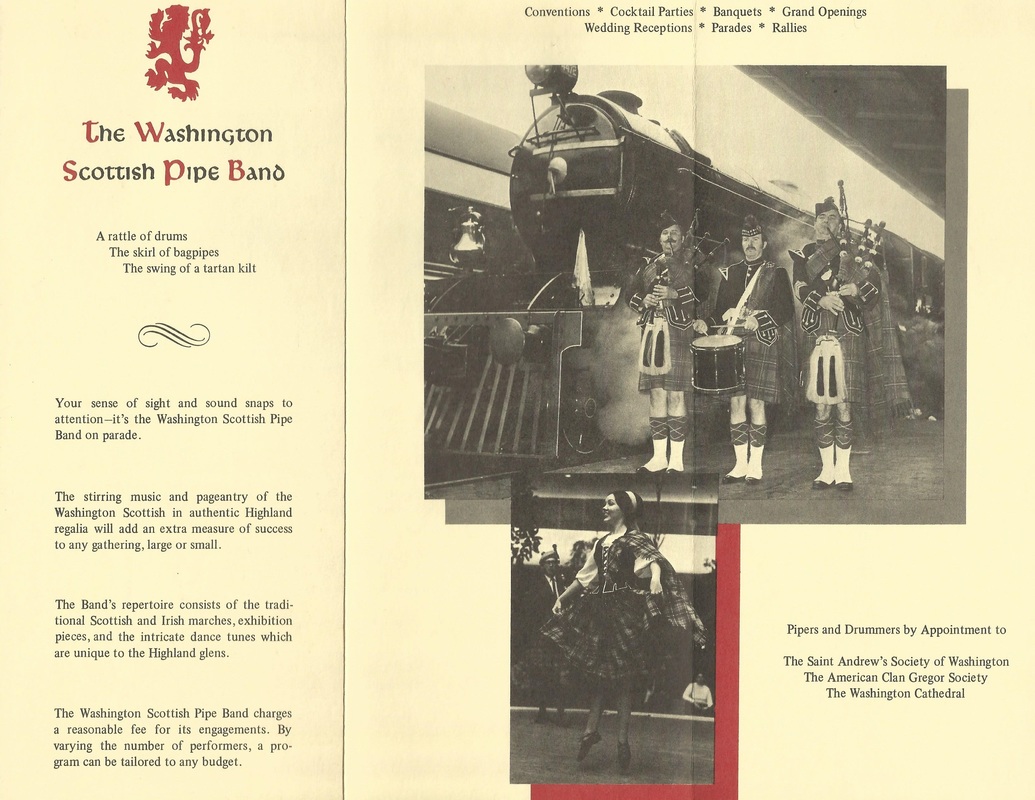 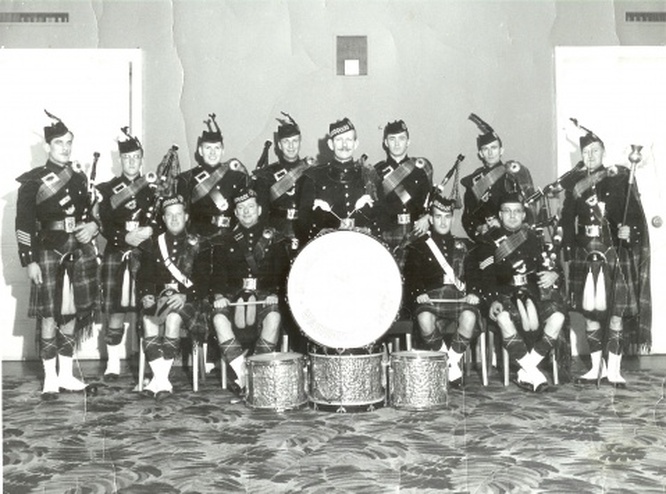 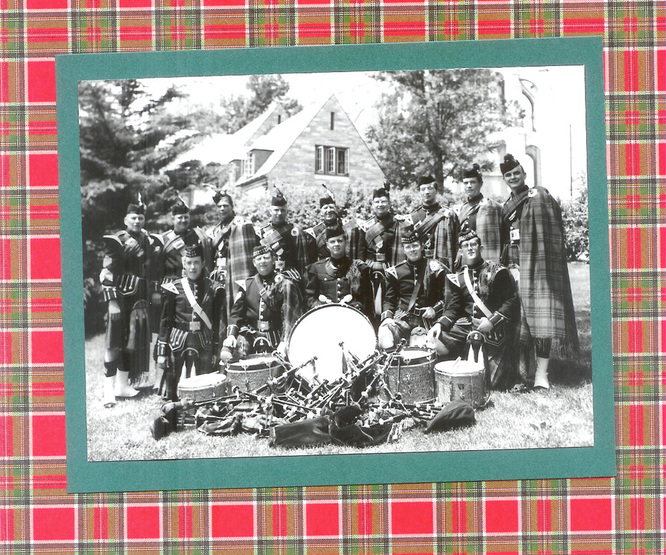 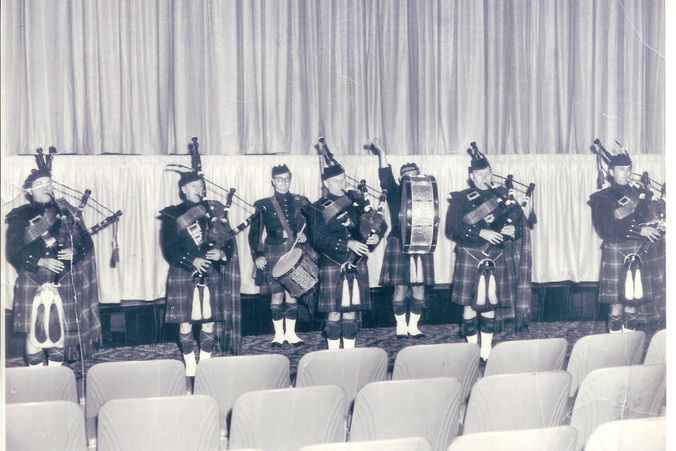 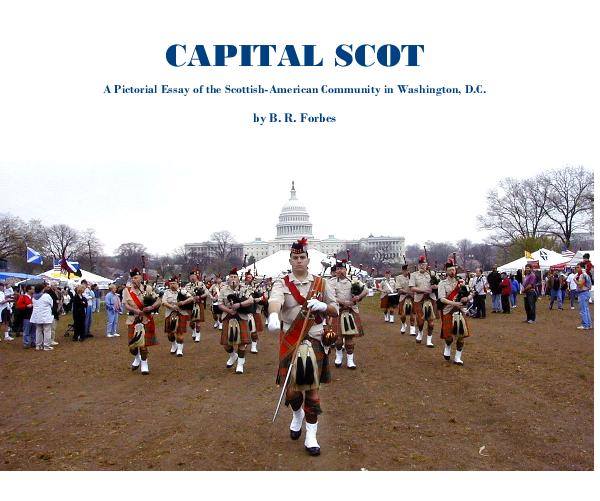 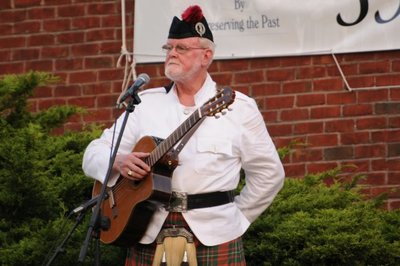 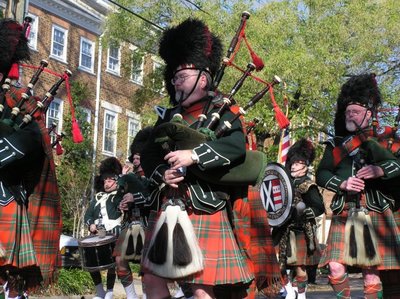 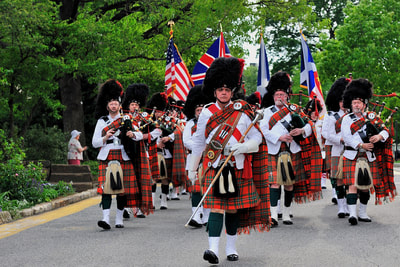 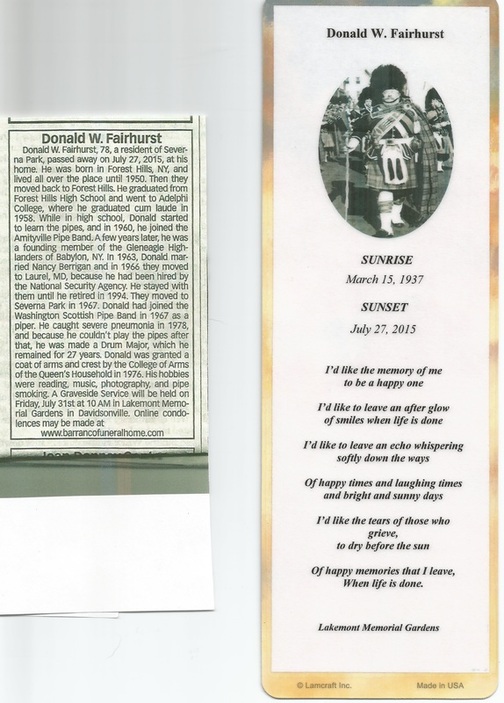 This ​appeared September 4, 1973 in the Washington Evening Star 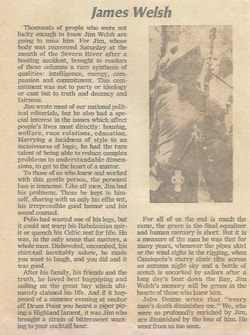 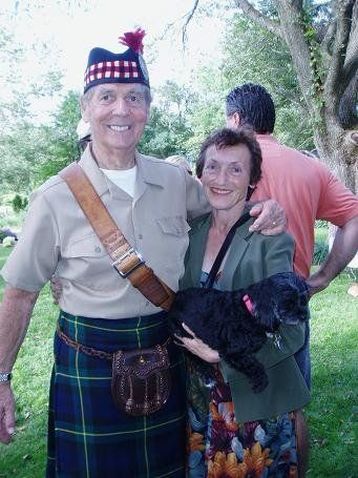 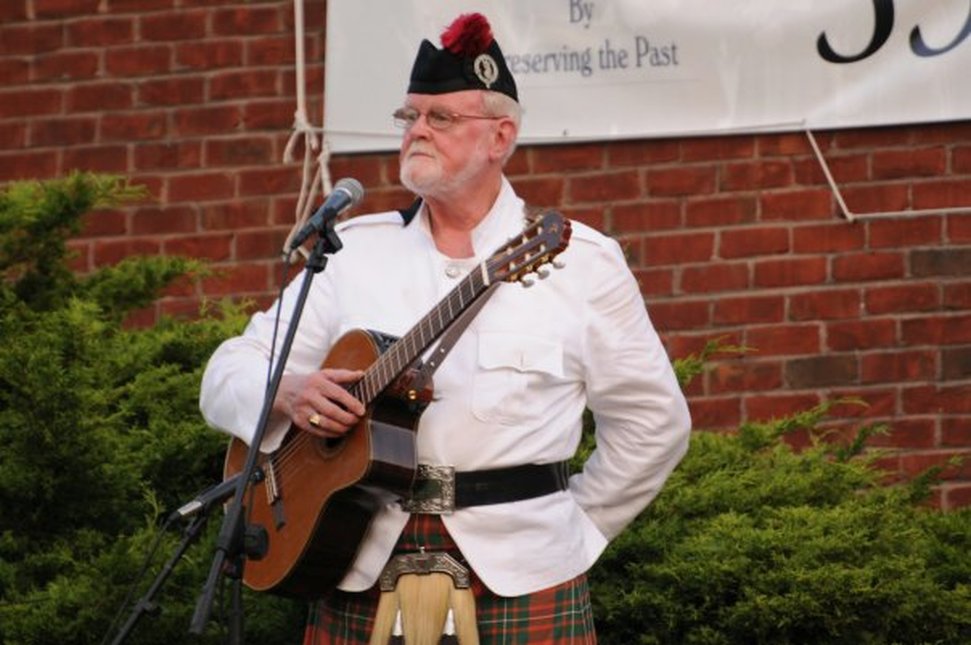 John Patrick Masterson was born on September 28, 1942 and passed away on May 17, 2018.
​John Patrick Masterson, 75, Professor Emeritus of English at Catonsville Community College, long-time member of the Washington Scottish Pipe Band, and dedicated CCD teacher at St. Mary’s Church, died at his home on May 17th, surrounded by loved ones.
John was born in Elizabeth, NJ where he developed his life-long love of airplanes and unmistakable musical talent. After graduating Marist High School in Bayonne, NJ, he attended Newark State College (now Kean University) where he studied English and became interested in folk music.
In 1964, he came to Maryland for graduate school where he met his wife, Pamela. He began teaching English at Catonsville Community College in 1966 and retired CCBC in 2011. John and Pam moved to Annapolis in 1975 where they raised two daughters, sailed a small boat, and threw raucous parties with plenty of men in kilts.
John will be remembered as a legendary wit, beloved teacher, devoted father and husband, noted reveler, and guitarist and piper extraordinaire; as a standard-bearer for all things Irish, merciless dispatcher of cocktails, grammar guardian, apron model, armchair Jeopardy wiz, purveyor of puns, and font of good cheer; as an insatiable news hound, a dimpled tippler, clever wordsmith, master of snacks (his “famous dip”), exemplar of charity, friend magnet, Jersey boy, iconic parader (magnificent in a Scottish feather bonnet), master of ceremonies, man of faith, and, quite possibly, the world’s nicest man.
He is survived by his wife of 43 years, Pamela Walker Masterson, daughters Jennifer Martin Odenwald (Peter) and Joanna Masterson Young (Geoffrey), and grandchildren Jack, Maddy, and Peri Odenwald, all of Annapolis. His brother Jim and sister Liz still reside in New Jersey.
​Rest in Peace John,
Bard of the Washington Scottish 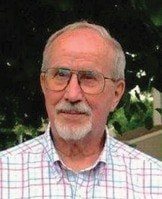 David L. Taylor - May He Rest in Peace​​
David Leroy Taylor, age 86 of Durham, passed away October 4, 2020. He was preceded in death by his parents Elias D. and Emily R. Taylor; sister Lois Passey; brother Roy Taylor; wife Diana Taylor; and wife Lana Gatti. He is survived by daughter Maria (Curtis) Chi of Durham, and grandson Victor Chi of Charlotte.
David was born in Seattle WA where he developed a life-long love of all things Scottish, including pipes and drums. After completing his master's degree in Chemistry at the University of Michigan, he held several teaching positions in Germany and Japan. It was in Tokyo where he met and married Jane Bartlett. The pair attended the University of Hawaii, where David earned his PhD. Daughter Maria was born and there were many wonderful trips to Ala Moana beach.

David settled in the Washington DC area and taught Chemistry at Northern Virginia Community College, until retirement in 2002. During this time, he was the bass drummer in the Washington Scottish Pipe Band and loved lifting a pint after a parade with the rest of the lads. Many will remember David as having a piquant sense of humor, a love of learning and critical thinking, and an appreciation of art and music.
Rest in peace
​
JOHN ALLEN LEES

John Allen Lees, 89, of Winchester, VA, died peacefully at his home at Westminster Canterbury of the Shenandoah Valley, on June 21, 2021, surrounded by his loving family. Born on October 13, 1931, John was the son of Justin Dempster and Hazel Beck Lees, of Pittsburgh and Sewickley, PA, and the grandson of John Andrew Beck, also of Pittsburgh. He passed his formative years in Sewickley, PA, where he attended the Sewickley Academy. John was a 1950 graduate of Brooks School. He received a BA from Columbia College in 1954, and a BS from the Columbia School of General Studies in 1958. John served in the US Army from 1954-1956. He earned a PhD in Geology from Pennsylvania State University in 1964. While at Penn State, John met and married Alice Allan Hoyt, also a student at the University. Upon John’s graduation, he and Alice moved to New Orleans, LA, where John worked first for Amoco Oil Company, and then for the US Geological Survey. While there, the three Lees children attended Trinity Episcopal School. John and Alice enjoyed sailing on Lake Pontchartrain, and Alice began art school at Tulane University.

A transfer in 1974 took the Lees family to Washington, DC, where John continued to work for the USGS (subsequently Minerals Management) until his retirement in 1988, when he and Alice moved to a small farm in Waterford, VA. After 18 happy years of farm life, they downsized to a small house in Philomont, VA, and from thence, to Westminster Canterbury.

During his long life, John enjoyed many activities: sailing; collecting gemstones; horseback riding of all kinds; and most of all, bagpiping. He was a member of the Washington Scottish Pipe band for many years, as well as playing with Winchester Pipes & Drums during his years in Winchester. Among his friends and family, John enjoyed a well-deserved reputation as a raconteur and wit. He, Alice, and their children spent many summers at Eatons’ Ranch, near Sheridan, WY.

Interment of ashes will be at Cool Spring Cemetery in Berryville, VA, on Wednesday, July 7, at 1:00 pm. On the following day, Thursday, July 8, a memorial service in celebration of John's life will be held at 1:00 pm at the Unitarian Universalist Church of the Shenandoah Valley in Stephens City, VA.

In lieu of flowers, gifts may be made in John’s name to Brooks School, North Andover, MA; Columbia College, New York City; or the Fellowship Fund of Shenandoah Valley Westminster Canterbury, Winchester, VA.
The Washington Scottish have played in the Baltimore & D.C. Areas and around the United States
for over 50 Years, in a wide range of Venue.

Weddings, Parties, Parades and Gatherings of all Nature.